Former EBWF Women’s Champion, and member of Legion, has not been seen on EBWF TV since she lost her championship to Shayna Baszler at the Royal Rumble back in January, bringing her 10 month title reign to an end. Many fans have wondered why she has not been seen on TV since, and even let her contract expire along with the rest of the members of Legion (Tommy End and Michael Dante).

After several weeks of social media silence… we may finally have our answer. Zahra Schreiber posted lyrics to “Resentment” by A Day To Remember along with a link to the video.

ZahraInChains:
“You know I lost my voice when I let the rot in
Hard truth cuts both ways
Pouring out my heart, all that's unforgiven
Washing over me like rain” #Resentment https://www.youtube.com/watch?v=6K0AmeM ... ex=57&t=0s


A fan then commented on the post and asked when she would be returning to EBWF to challenge for her title again. Schreiber replied:


An hour after her comment was posted, Schreiber posted a new photo of herself holding her stomach. She did not go into any detail, opting just to post the photo along with the hashtag #10weeks. We wish Schreiber and family all the best! 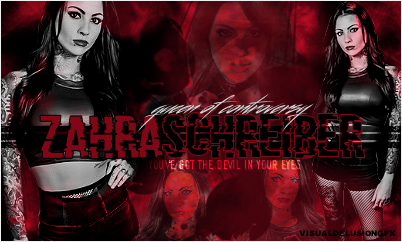