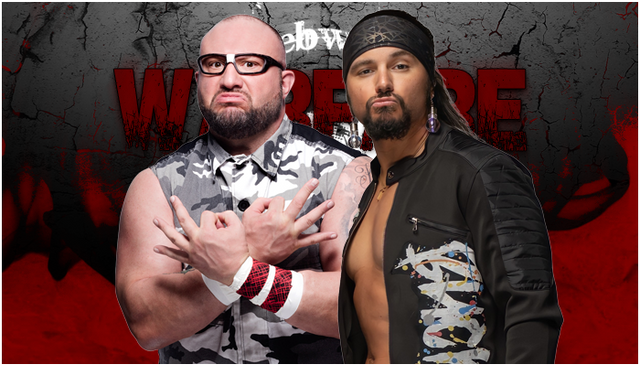 The crowd was hot for the start of Warfare as EBWF went live!

Mauro Ranallo: Get ready folks... it's time for Warfare!

Pyro shot off from the stage and Matt Jackson's theme played as he came from the back.

Nigel McGuinness: And what a Warfare it is set to be as tonight we name four more men who will be on their way to the second roung of the King of the Ring tournament!

Mauro Ranallo: There you see Matt Jackson on his way to the ring, and tonight he'll take on another member of a prolific tag team...

Bubba Ray's music hit and the crowd gave a mixed reaction to the legendary tag team wrestler. He charged into the ring where Matt was waiting for him.

Nigel McGuinness: Neither man's brother is here to help him out tonight, Mauro!

The bell rang, and Matt dropkicked him to the corner.

Matt punched away at him until the referee backed him up.

Nigel McGuinness: Matt Jackson having to be called off. That's a quick way to get yourself counted out!

Matt continued punching him and gave him a shoulder thrust. Bubba then ran him over with a clothesline. Bubba put him in the corner and delivered brutal chops the chest.

Matt punched back at him before kneeing him in the sternum. They traded punches before Bubba kicked him in the face.

Nigel McGuinness: Matt Jackson may have lost a tooth there! Did you see that Mauro?

Bubba hit the ropes and ate a superkick. Matt set up in the corner and charged, but Bubba got the legs up, kicking Matt in the head!

Nigel McGuinness: Matt Jackson is down! Bubba with the setup!

Bubba Ray had moved to his feet and connected with a Bubba Bomb.

Mauro Ranallo: That should do it!

Nigel McGuinness: And with the brackets filling up, we know that Bubba will take on Chris Jericho or Prince Devitt in the next round. What a matchup that will be, Mauro!

Bubba Ray had his hand raised in victory as a promo for Total Supremacy began to play. 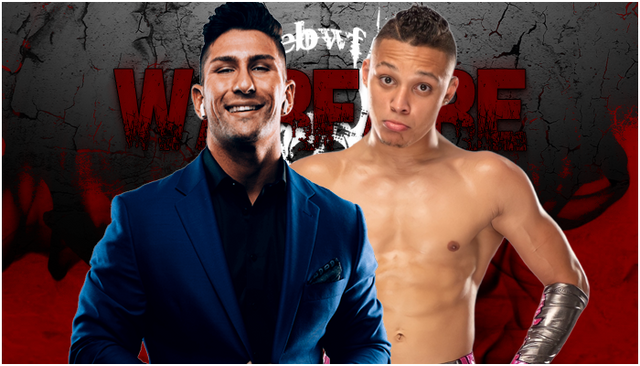 Nigel McGuinness: Up next, we’ve got Dynasty versus Dynasty as “Truly Blessed” KC Navarro takes on the “most marketable man in wrestling”, Richard Holliday.

KC Navarro made his way to the ring first, followed by Richard Holliday. Both men were booed by the crowd. As they entered the ring, the referee went to call for the bell, but before he could Holliday stopped him and called for a microphone. After he was handed the microphone, Holliday began to speak.

Richard Holliday: Alright, KC. As marketable as this match is… the people of Birmingham, Alabama don’t deserve such a high caliber match! So how about we flip a coin?

KC shrugged. Richard went to reach into his pocket for a coin… then looked down and shook his head.

Richard Holliday: Oh never mind… no pockets. Alright, I guess we’d better make it a fair fight, and steal the show while we’re at it!

Richard dropped the microphone and signaled for the referee to call the bell. As the bell rang, Holliday and Navarro both clenched their fists… then played rock, paper, scissors!

Mauro Ranallo: I can’t believe what I’m seeing here… are they seriously going to settle this with a game of rock, paper, scissors?!

Holliday went for “rock”, but was beaten by KC Navarro’s “paper”. Holliday looked disappointed, but he rolled out of the ring and began walking up the ramp. The referee began counting: 1… 2… 3… 4… 5… 6… 7… 8… 9… 10! The referee called for the bell, and begrudgingly held Navarro’s arm up in victory. Holliday applauded his fellow Dynasty member, then walked through the curtain. Navarro had a huge celebration in the ring, which seemed to enrage the crowd. Navarro continued celebrating as Warfare went to a commercial break. 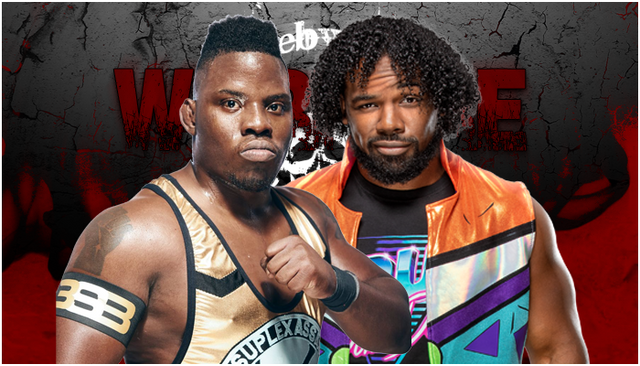 When Warfare returned from the commercial break, Alex Kane was on his way to the ring for the next match.

Mauro Ranallo: Welcome back! Before the break, we saw KC Navarro “defeat” his fellow Dynasty member Richard Holliday in somewhat controversial circumstances… Up next, we’ve got another member of Dynasty in action as the “Suplex Assassin” Alex Kane takes on the Breakout Champion, Xavier Woods!

When Kane was in the ring, “New Day New Way” hit and the crowd cheered as Xavier Woods headed to the ring.

Nigel McGuinness: Xavier Woods already calls himself a King… in this tournament, he has the chance to earn that title!

After Woods had entered the ring, the referee called for the bell. Woods and Kane locked up and Woods went for a headlock, but Kane broke free and hit Woods with a back suplex. Both men got to their feet and Kane hit Woods with a series of punches, then whipped him against the ropes. As Woods ran back towards him, Kane went for a clothesline, but Woods ducked out of the way, then spun around and hit Kane with a spinning heel kick. Woods then ran against the ropes and hit Kane with an elbow drop, before hooking the leg. The referee counted - 1… 2… Kane kicked out! As both men got to their feet, Woods set Kane up for a cradle suplex, but Kane blocked it, countering with an overhead belly-to-belly suplex!

Nigel McGuinness: Woods made a mistake there trying to suplex the Suplex Assassin… Alex Kane had that well scouted!

Woods sat up clutching his back, and Kane grabbed him from behind, applying a chinlock. Woods tried to fight out of it and was able to get to his feet, but as he did so Kane whipped him into the corner, then sat him on the top rope and hit a superplex! He hooked the leg and the referee counted - 1… 2… Woods kicked out! Kane pulled Woods to his feet and hit him with a series of punches, then set him up for a gut wrench suplex… but Woods broke free and countered with a jawbreaker! As Kane stumbled backwards, Woods rolled across the ring towards him, hitting the Honor Roll! He hooked both legs and the referee counted - 1… 2… Kane kicked out just before the 3!

Mauro Ranallo: Woods was so close to victory!

Woods pulled Kane to his feet and hit him with a series of backhand chops, then whipped Kane against the ropes. As Kane ran back towards him, Woods went for an arm drag, but Strong blocked it, countering with an Olympic Slam. He hooked the leg and the referee counted - 1… 2… Woods kicked out! Kane looked frustrated and he dragged Woods to his feet, setting him up for the Southern Lights Suplex… but Woods blocked it, countering with a bulldog! Both men got to their feet and Woods hit Lost in the Woods then hooked the leg! The referee counted - 1… 2… 3!

Nigel McGuinness: It’s over! Xavier Woods advances to the second round, where he will face KC Navarro!

Woods celebrated, then made his way to the back as a video package played showing some of the highlights from the match. 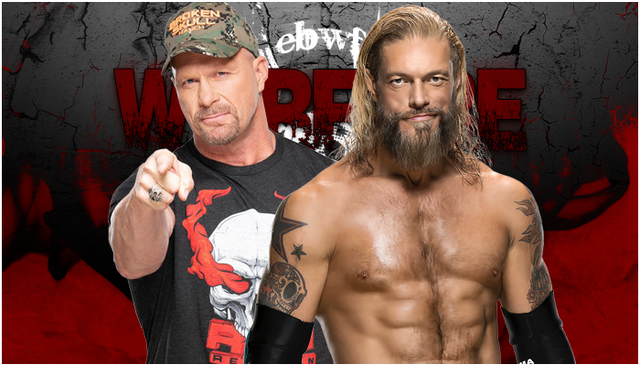 When EBWF returned from commercial, the glass broke and the crowd moved to their feet as Stone Cold Steve Austin came from behind the curtain. He sauntered to the ring and got inside, playing to the crowd.

Mauro Ranallo: You know, Nigel, Edge kind of poked fun at this match.

Nigel McGuinness: Both of these men have been working in this industry for a long time. It's a clash of the titans here in the main event tonight!

The crowd starts up the dueling chants of, “Let’s go Austin/Let’s go Edge!” as "You Think You Know Me!" blared and Metalingus hit while Edge came from behind the curtain. He did his usual entrance, hyping the crowd, and then proceeded down to the ring. He took off his trenchcoat once inside and gave it to the timekeeper as the bell rang. They locked up, but then got a clean break.

Mauro Ranallo: I don't think a show of strength is going to work here!

They looked out to the crowd, and the crowd applauded. They locked up, and Edge backed him to the corner and slapped Austin in the face. Edge smirked as the crowd "ooohed". Edge shrugged, getting the crowd back into it as he applied a waistlock and took Austin down. Austin looked furious and Edge mouthed off.

Nigel McGuinness: These are a couple of guys whose mouths could quickly get them into trouble, Mauro!

Austin sent Edge out of the ring and taunted him to get back inside. Edge got in the ring and wrenched Austin’s arm. Edge hit an arm breaker before wrenching the arm again. Austin quickly forearmed Edge down to his knees. Austin started clubbing Edge in the corner, but Edge attacked the injured arm. Edge sent him shoulder-first into the ring post and took him down for an armbar, but Austin rolled out of the ring to recover. Edge attacked Austin getting in the ring and knocked him back outside. Edge charges Austin outside the ring, but Austin hit him with a back body drop to the floor.

Austin went back outside and sent Edge head-first into the ring post. Edge barely got in the ring to break the count-out. Austin sent Edge out of the ring again and drove him into the ring steps. Austin got Edge in the ring and forearmed him in the face a few times. Austin then sent him shoulder-first into the ring post. Austin talked some trash, then applied a chin lock for a long time. Edge fought up, so Austin took him down. Austin hit a big boot to the midsection and then Austin charged, but Edge countered into a backslide pin for the pinfall.

Austin kicked out and they got to their feet before wiping each other out with stereo big boots.

Mauro Ranallo: Both men are down!

They crawled to opposite bottom ropes to get to their feet. They traded back and forths, and Edge got the upper hand hitting Austin with an Edge-O-Matic for a near fall. Edge got to his feet and the crowd came alive. Edge hit a clothesline and got fired up. Austin booted Edge back and hit the ropes. Edge attacked and hit the Impaler DDT for a near fall.

Nigel McGuinness: Edge is wondering what more he has to do!

Edge attacked Austin in the corner and put him on the top rope. Edge then slammed Austin’ face off the top of the ring post. Austin was in the tree of woe. Edge pulled Austin down and applied an STF. Austin fought it, so Edge transitioned to a crossface. Austin reached out and grabs the bottom rope to break the hold.

Edge dropped back into the corner and sized Austin up.

Austin pulled himself up by the middle rope and Edge was bouncing in the corner.

Edge laid out Austin with the trademark move and pinned The Rattlesnake.

Mauro Ranallo: It's Edge! The double champion! He moves to the second round of the King of the Ring tournament.

Nigel McGuinness: He's no stranger to going deep into this tournament and...

The camera focused on Edge, who was looking squarely into the hard camera. He held up a peace sign before turning his hand downward to make the A sign associated with the Acclaimed. Just as the crowd caught on, he turned that A into a middle finger and flipped off the camera to a mixed reaction from the crowd.

Nigel McGuinness: This crowd isn't sure how to react, but Edge knows that Max Caster is next and he doesn't care that The Acclaimed have arrived.

Edge climbed up on the turnbuckle as his music blared, and he continued to celebrate as EBWF went off the air.

Writers aren't exactly people. They're a whole bunch of people. Trying to be one person.
The only living, breathing, Queen of Efeds in captivity
"You can't blame a writer for what the characters say." - Truman Capote
Top
1 post • Page 1 of 1